Jody Travis Thompson was born in 1972 in Sulphur, Louisiana. He began his formal artistic education in 1982 in his hometown, through private classes with Jane Ludwig-Johnson. This education would instruct Thompson on the mechanics of manipulating the medium of oil paint in Renaissance tradition. “I was being trained to see the world as paint” Thompson states. The system this forced him to concentrate on a painting being first and foremost about the process of paint, instead of being about the subject matter. Thompson adds, “…by training my brain to see the world in paint rather than seeing a photograph, therefore the life of the painting is free in the action of making it instead of being confined by the thought of what it should or shouldn’t be”.

Jody completed his Masters of Fine Arts from the university of Arkansas in 2019. 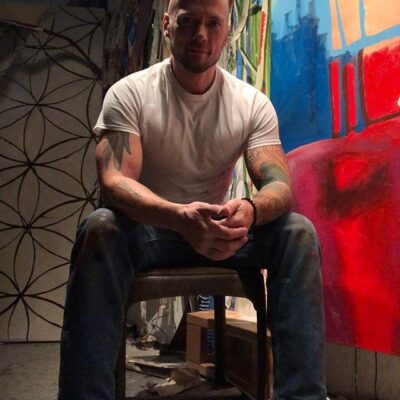 Identity, the fallibility/malleability of human memory, and perception are constructions of thought that I seek to disrupt. I utilize conventions such as trompe l’oeil realism and non-objective geometric abstraction in visualizing space and movement. Oil paint, resin, make-up and other traditional and non-traditional painting materials create built-up surfaces. These textures and varying degrees of opacity allow the materials to retain the physical history of the painting. Images of monkey bars, lattice, childhood memories, golden ratio, flower of life patterns, and various degrees of figuration provide opportunities for me to visualize the mutability of perception and logic. I seek to queer perception through camouflaging non-traditional materials with more traditional painting methods; representing of my experience with third- person memory, reoccurring childhood dreams, construction of personal, spiritual narratives, as well as reconciling my identity as gay, white, and male.

Thompson began study at McNeese State University in Lake Charles, Louisiana. He was introduced to the usage of deep color, and striking, dramatic highlights that Caravaggio influenced in the Baroque period; the honest, objective observation of Leonardo DaVinci during the High Renaissance; and the masterly treatment of intense light and shadows of reflection by Johannes Vermeer in the Dutch Golden Age. While acquiring a Bachelor’s Degree in Fine Art/Painting, focused his natural ability on learning Italian Renaissance techniques that would heavily influence the foundation of his artistic language.